Take the delight of our comfortable, affordable, and surreal Kailash Mansarovar Yatra package. You can explore the untamed nature and power of the divine en route at a pocket-friendly Kailash Mansarovar Yatra cost. Embarking on the Kailash Yatra remains on the bucket list of a vast majority of Hindus. The tour will start from Kathmandu and will take you to the impeccable landscapes of Kailash Manasarovar in Tibet. So get ready for a must-do holy journey to the land of Gods where you can be blessed by Lord Shiva! Divine Kailash offers you a safe yatra during this COVID-19 situation.

With a height of 6, 638 m (21, 778 ft), the high peak of Mount Kailash is dubbed as the “Stairway to Heaven”. It forms a part of the Trans-Himalaya in the Ngari Prefecture, Tibet Autonomous Region, China. The divine Mt. Kailash is nestled near Lake Rakshastal and Lake Manasarovar. Considered sacred in Buddhism, Hinduism, Bon, and Jainism, Mt Kailash finds its origin in the world “kelasa”, meaning “crystal”.

The Mystical Lake of Kailash Manasarovar

The mystically beautiful Lake Mansarovar lies at the base of Mount Kailash at an altitude of 4, 590 m above mean sea level. It is a freshwater lake in Burang County, Ngari Prefecture, Tibetan Autonomous Region, China. Fed by the Kailash Glaciers, Lake Mansarovar mixes with its next-door neighbor, Rakshas Tal. Interestingly, the holy lake’s water remains placid whether it is windy or not. The name of the lake is a blend of two Sanskrit words- Manas and Sarovara. While Manas means mind, and Sarovara means “a lake or a large pond”. Lake Mansarovar has remained a pilgrimage site for thousands of years. Its religious significance is immense and unending.

Cooped up in the majestic Trans-Himalayas of Tibet, this natural wonder of Kailash Mansarovar has captivated several pilgrims from Tibet, India, Nepal, and many other countries. Not only natural mysticism but the Kailash Mansarovar temple and surrounding region is also steeped deep into mythology. The holy Kailash mountain is considered to be the center of the world by four different religions.
Since time immemorial, several ancient religions have considered Lake Manasarovar and Mount Kailash, Lord Shiva’s abode, as a place where anyone can attain Nirvana. Some people believe that walking around the mountain or the lake brings good fortune. This ritual is known as Kailash parikrama. Devotees also believe that bathing in the holy lake’s water washes off all the sins. However, on the other hand, some go on the Kailash Parvat Yatra to test their mental strength and physical endurance through a rugged Kailash Mansarovar trek!

The Kailash parikrama, or circumambulation, is a religious ritual of circling the natural shrines that form an important part of the journey to Kailash and Manasarovar. Generally performed in a clockwise direction, the religion Bon performs it anticlockwise. Buddhists believe that Kailash parikrama is equivalent to going through a cycle of life and rebirth into a new life. It is also believed that one parikrama can wash off a lifetime’s worth of sins, and completing 108 parikramas can ensure nirvana or liberation from the circle of life and death.

The outer kora of the Kailash Parikrama is a 56km trek that takes 3 days with overnight stays at Zuthulpuk and Diraphuk. During the Kailash Outer Kora Parikrama, one needs to cross the Dolma La mountain pass which is 5, 620 meters in height and toughest in the entire Kailash Yatra.

You will directly head to the south face of Mount Kailash. Considerably harder than the outer Kora, the inner Kailash Parikrama needs 34 km of trekking around Nandi Parvat, Asthapath, Atmalingam, Saptarishi cave, Rakshas Lingam. The trek starts and ends at Darchen. Know that the Kailash Manasarovar trek takes you through rough, rocky, and snow-covered landscapes. 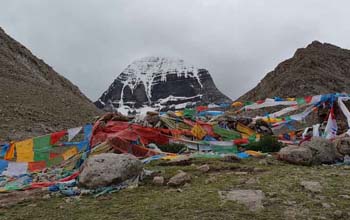 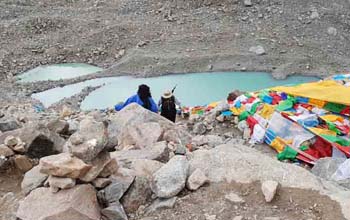 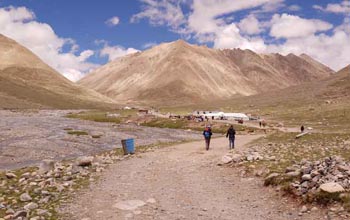 Description Of The Kailash Mansarovar Yatra

Here is a brief idea about our Kailash Manasarovar Yatra 2022:

Itinerary of the Kailash Manasarovar Yatra

The Activities of the Yatra from Lucknow

Here’s what you will do on your Manasarovar Yatra from Lucknow:

You can reach your destination by taking the Kailash Manasarovar yatra route from Lhasa. There are two ways to travel via Lhasa- the northern route and the southern route. The North Route via Namtso Lake is very rough and travels past Lake Namtso through Nagqu. On the other hand, the South Route via Everest Base Camp Travel Route is faster and includes Lhasa, Shigatse, Tingri, EBC, Saga, Darchen, and Mount Kailash. It covers a total distance of 1,577 kilometers. You can also board a flight if you want to avoid being on the road for days. The airport in Gunsa Village is the nearest. You will find direct flights from Lhasa Gonggar International Airport to Ngari departing daily at 7:30 am. The starting point of the Kailash Mansarovar Yatra 2022 is from Kathmandu.

Itinerary of the Kailash Manasarovar Yatra

The itinerary of Kailash Manasarovar Yatra via Lhasa is customizable so you can change it to as per your requirements, you can visit Kailash and Manasarovar via Everest Base Camp by road from Lhasa. Also, you can exit from the land border after your Kailash Yatra finishes, no need to return back via Lhasa.

Choose to travel during summer and monsoon, preferably from May to mid-September for your Kailash Manasarovar Yatra. It is the best time to trek, enjoy outdoor activities and enjoy the Saga Dawa Festival, a Tibetan Buddhist Festival.

Inclusions Of The Kailash Yatra

Here’s what is included in our Manasarovar tour packages:

We will not include the following in the Kailash Manasarovar yatra package:

Important Information For Yatris Above 70 years Of Age

For Kailash Mansarovar Yatra Connect us

Feel free to reach out to us to discuss the Kailash Mansarovar Yatra cost. We are always here to answer your queries and ensure that you have a safe and secured Mansarovar Trip.